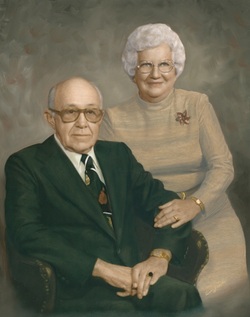 In the year 1975 this Library was presented as a gift to the people of Sugar Grove and the surrounding area by Mr. & Mrs. Howard Curtis. Mr. Curtis has been an oil producer in the area since 1940. He was later joined in the business by his son, Darwin "Bud" Curtis. The following is from the program supplied on the day of dedication, December 21, 1975:

"The Sugar Grove Area has always been library conscious. In 1874, Dr. C.J. Phillips donated a room in his home to serve as library and reading room. In 1881, the Hopkins Library, house in the Sugar Grove Seminary, was well supplied with the "latest and best" books, a contribution of H.J. Hopkins of Pleasantville. In 1893, this same donor gave $1,000 to bring that collection up-to-date. In 1895, the General Town Library, consisting of some 400 volumes, was transferred to the Union School for the "convenience and benefit of the pupils". Local newspapers of 1885 and 1886 announced the annual election of library officers and advertised "benefits" to be held in McDonald's Hall for library purposes.

On May 12, 1936, the President of the Sugar Grove Reading Club, Mrs. Alfred A. Grant, called a meeting of all persons interested in forming a free library association. That evening a constitution was adopted and seven trustees were elected to serve this newly formed association. In June of 1936, the Borough Council granted permission to house the Sugar Grove Free Library in the Council building.

The first president of the association, Mrs. Allene Briggs, served 22 years in this capacity and 30 years as a trustee. Mrs. Gertrude Stohlberg, the first librarian, served until 1960, a period of 24 years. This vacancy was filled by Miss Carribelle Swanson, and in 1961, Mrs. Della Anderson was named assistant librarian. Both are still faithfully serving. In 1955, Mrs. Audrey Miller became the new secretary and treasurer at the resignation of Mr. Frank B. Miller, who had filled the secretaryship from the association's beginning. Mrs. Miller, a trustee for 20 years, is presently serving her twentieth year in this position.

During its first year, the library circulated 2873 books and 282 periodicals; last year the circulation count was 8441 books and 486 periodicals. Since 1942, the Reading Club has sponsored the annual membership drive. In 1961, the trustees voted to join the Warren County Library Association, a member of the Seneca Library District.

Today, December 21, 1975, the Sugar Grove area no longer dreams of a new library building. The dream is a reality. Your Library--a precious heritage. Protect it!
Support it! Use it!"

Since this dedication of the Sugar Grove Free Library in 1975, the library has moved from offering strictly books and periodicals to embracing the 21st Century library which augments the books and periodicals with digital databases, eBooks, and electronic devices. There have also been many men and women that have held the position of Librarian/Director and Assistant and we thank them for their service.